You can also save this image without the membership - but only in small and average sizes, and it may have the site's watermark. Please simply click your right mouse button and save the image.
All free photos → Free Photos of Nature →  Free Photos of Stars → Photo of GALEX UV Images of Mira 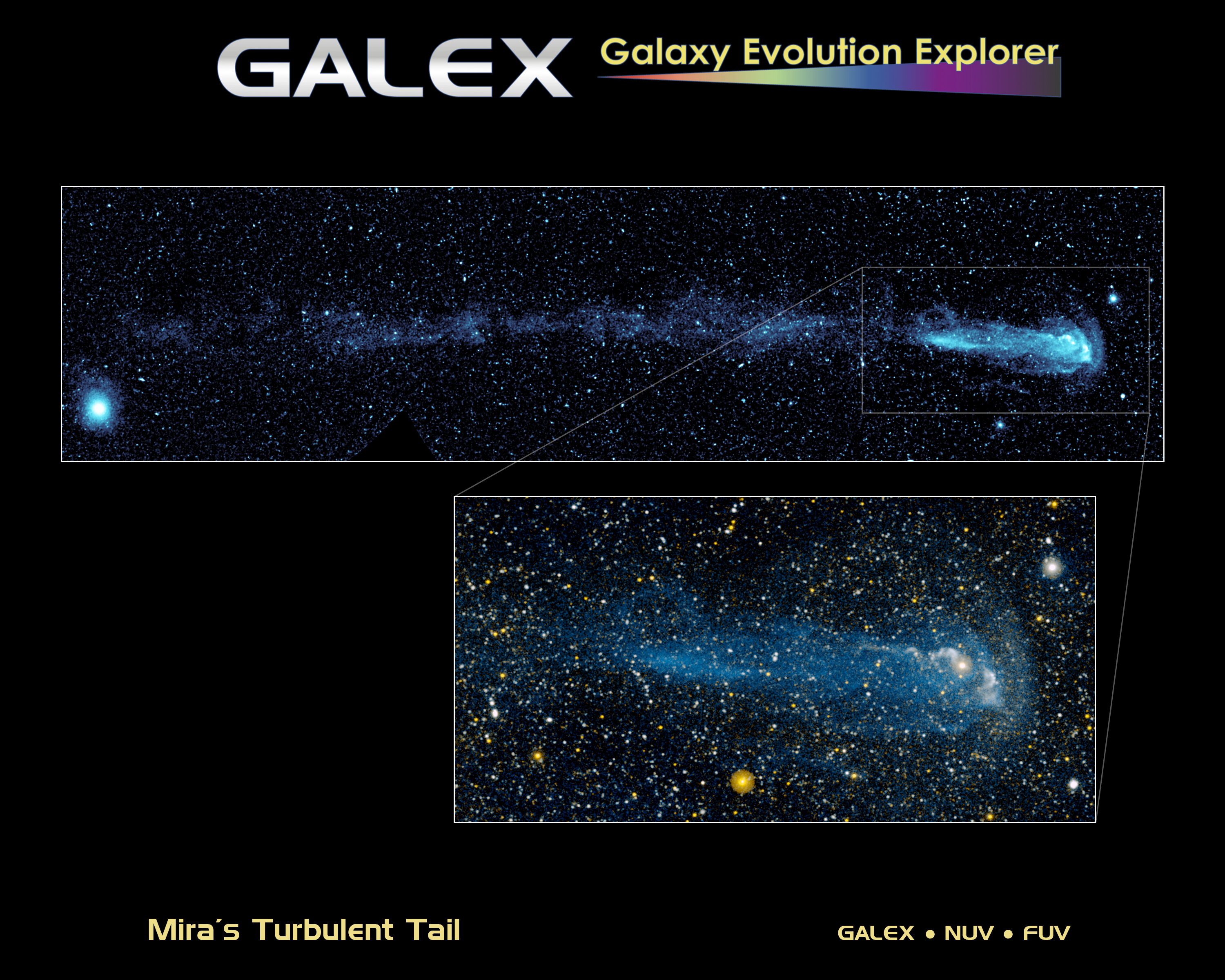 New ultraviolet images from NASA's Galaxy Evolution Explorer shows a speeding star that is leaving an enormous trail of "seeds" for new solar systems. The star, named Mira (pronounced my-rah) after the latin word for "wonderful," is shedding material that will be recycled into new stars, planets and possibly even life as it hurls through our galaxy. The upper panel shows Mira's full, comet-like tail as seen only in shorter, or "far" ultraviolet wavelengths, while the lower panel is a combined view showing both far and longer, or "near" ultraviolet wavelengths. The close-up picture at bottom gives a better look at Mira itself, which appears as a pinkish dot, and is moving from left to right in this view. Shed material appears in light blue. The dots in the picture are stars and distant galaxies. The large blue dot on the left side of the upper panel, and the large yellow dot in the lower panel, are both stars that are closer to us than Mira. The Galaxy Evolution Explorer discovered the strange tail during part of its routine survey of the entire sky at ultraviolet wavelengths. When astronomers first saw the picture, they were shocked because Mira has been studied for over 400 years yet nothing like this has ever been documented before. Mira's comet-like tail stretches a startling 13 light-years across the sky. For comparison, the nearest star to our sun, Proxima Centauri, is only about 4 light-years away. Mira's tail also tells a tale of its history Ð the material making it up has been slowly blown off over time, with the oldest material at the end of the tail being released about 30,000 years ago. Mira is a highly evolved, "red giant" star near the end of its life. Technically, it is called an asymptotic giant branch star. It is red in color and bloated; for example, if a red giant were to replace our sun, it would engulf everything out to the orbit of Mars. Our sun will mature into a red giant in about 5 billion years. Like other red giants, Mira will lose a large
Licensing:
Public Domain
Only registered users can post comments. Please login.