You can also save this image without the membership - but only in small and average sizes, and it may have the site's watermark. Please simply click your right mouse button and save the image.
All free photos → Free Photos of Nature →  Free Photos of Stars → Photo of Star-forming Cloud in Cepheus 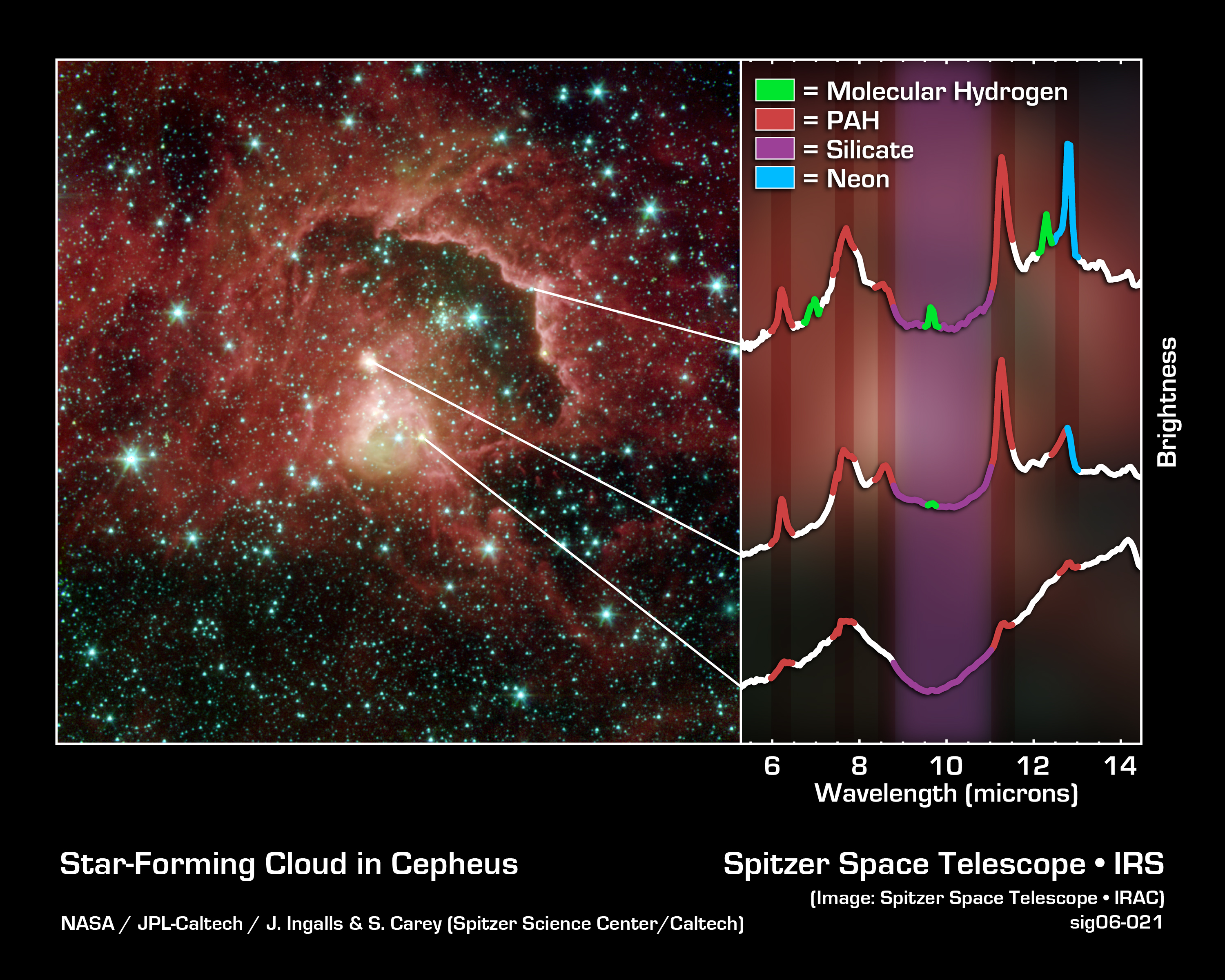 This image from NASA's Spitzer Space Telescope reveals the complex life cycle of young stars, from their dust-shrouded beginnings to their stellar debuts. The stellar nursery was spotted in a cosmic cloud sitting 21,000 light-years away in the Cepheus constellation. A star is born when a dense patch gas and dust collapses inside a cosmic cloud. In the first million years of a star's life, it is hidden from visible-light view by the cloud that created it. Eventually as the star matures, its strong winds and radiation blow away surrounding material and the star fully reveals itself to the universe. The first stages of stellar life are represented by the greenish yellow dot located in the center of the image (just to the right of the blue dot). Astronomers suspect that this source is less than a million years old because spectra of the region (right bottom graph) reveal a deep absorption feature due to silicate dust (crushed crystalline grains that are smaller than sand) indicating that the star is still deeply embedded inside the cosmic cloud that collapsed to form it. Wisps of green surrounding the star and its nearby environment illustrate the presence of hot hydrogen gas. Above and to the left of the central greenish yellow dot, a large, bright pinkish dot reveals a more mature star on the verge of emerging from its natal cocoon. Although this star is still shrouded by its birth material, astronomers use Spitzer, a temperature-sensitive infrared telescope, to see the surrounding gas and dust that is being heated up by the star. The region's oldest and fully exposed stars can be seen as bunches of blue specks located just left of the concave ridge. Energetic particles and ultraviolet photons from nearby star clusters etched this arc into the cloud by blowing away surrounding dust and gas. Spectral observations of the ridge (right top graph) and reddish-white dot, or "mature star" (right middle graph), indicate the presence of carbon rich molecules called polycyclic
Licensing:
Public Domain
Only registered users can post comments. Please login.