You can also save this image without the membership - but only in small and average sizes, and it may have the site's watermark. Please simply click your right mouse button and save the image.
All free photos → Free Photos of Nature →  Photos of Galaxies → Photo of Ssc2004-19a 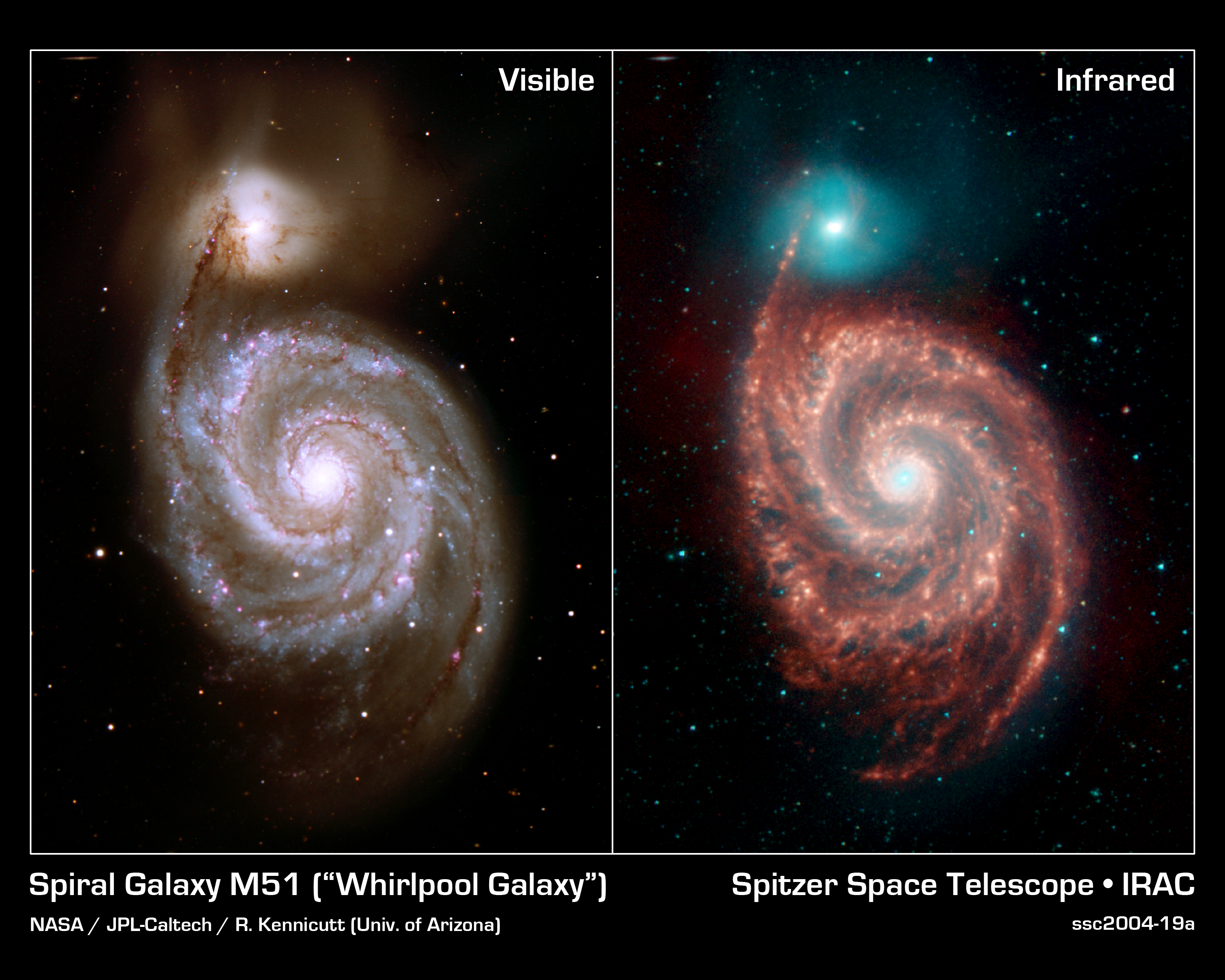 This photo was viewed 3 times and was downloaded in full size 2 times.

NASA's Spitzer Space Telescope has captured these infrared images of the "Whirlpool Galaxy," revealing strange structures bridging the gaps between the dust-rich spiral arms, and tracing the dust, gas and stellar populations in both the bright spiral galaxy and its companion.

The Spitzer image is a four-color composite of invisible light, showing emissions from wavelengths of 3.6 microns (blue), 4.5 microns (green), 5.8 microns (orange) and 8.0 microns (red). These wavelengths are roughly 10 times longer than those seen by the human eye.

The visible light image comes from the Kitt Peak National Observatory 2.1m telescope, and has the same orientation and size as the Spitzer infrared image, measuring 9.9 by 13.7 arcminutes (north up). Also a four-color composite, the visible light image shows emissions from 0.4 to 0.7 microns, including the H-alpha nebular feature (red in the image).

The light seen in the images originates from very different sources. At shorter wavelengths (in the visible bands, and in the infrared from 3.6 to 4.5 microns), the light comes mainly from stars. This starlight fades at longer wavelengths (5.8 to 8.0 microns), where we see the glow from clouds of interstellar dust. This dust consists mainly of a variety of carbon-based organic molecules known collectively as polycyclic aromatic hydrocarbons. Wherever these compounds are found, there will also be dust granules and gas, which provide a reservoir of raw materials for future star formation.

Also of interest is the contrast in the distributions of dust and stars between the spiral and its faint companion. While the spiral is rich in dust, bright in the longer infrared wavebands, and actively forming new stars, its blue companion shows little infrared emission and hosts an older stellar population. The spectacular whirlpool structure and star formation in M51 are thought to be triggered by an ongoing collision with its companion. Understanding the impact on star formation by the interaction of galaxies is one of the goals of these observations.

The targeted galaxy is known by various names: M51 from its Messier catalog designation, and also as NGC 5194. M51 was one of the original discoveries of Charles Messier, found in October 1773 while he was observing a faint comet. The Messier catalogue of galaxies is named after him. Colloquially, M51 is also known as the "Whirlpool Galaxy", or "Rosse's Galaxy," after Lord Rosse, who first detected galaxy spiral structure in his observations of M51. The companion, NGC 5195, was discovered in 1781 by Pierre Mechain.

The Whirlpool galaxy is a favorite target for amateur and professional astronomers, alike, and was the first light target for the Infrared Space Observatory. Found in the constellation Canes Venatici, M51 is 37 million light-years away.

The Spitzer observations of M51 are part of a large 500-hour science project, known as the Spitzer Infrared Nearby Galaxy Survey, which will comprehensively study 75 nearby galaxies with infrared imaging and spectroscopy. From these data, astronomers will probe the physical processes connecting star formation to the properties of galaxies. This information will provide a vital foundation of data, diagnostic tools, and astrophysical inputs for understanding the distant universe, ultraluminous galaxies, and the formation and evolution of galaxies.